The Influencer is dead. Long live the influencer

The Influencer is dead. Long live the influencer

Even though the video games industry has utilized influencers for many years to raise awareness, it seems as of late the world has woken up.

Traditional journalists of mainstream media report their astonishment at how these homemade celebrities are riding the crest of a wave (as well as their possible envy of how they can live the freebie dream whilst promoting major brands...?). Whilst influencers now exist in most major industry sectors, video games were clearly an early adopter for this refreshing communication vehicle.

Their use is well established in the communication strategy as they unmistakably can make or break a game's success. However as with most nonpartisan movements, professionalism and commercial reality bites for a successful influencer.

For instance, in the 12 months of 2016, the top 10 influencers covered around 300 different games and this reduced to only 28 different games by 2018. This is a clear indication that influencers are focusing on what drives the most views and/or the relationships they are forging with major publishers, with half of those 28 selected games being AAA console titles.

In general, influencers are posting the same number of videos over the last three years -- on average, just over one video a day -- but their staying power as a Top 10 influencer is being constantly challenged. Only half of the Top 100 influencers of 2018 are still holding their position when compared to 2017, and 20% are channels news to our monitoring system.

Therefore, it seems that no YouTuber's influential status is guaranteed -- even when you reach the dizzy heights of DanTDM who, with over 20 million subscribers, fell out of the Top 10 influencers in 2018, slipping ten places to 16th. In fact, 80% of 2018's Top 10 influencers were not in the Top 10 of 2017. 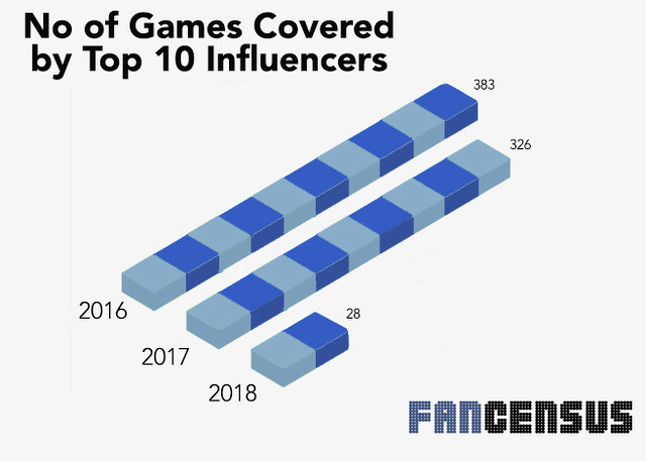 When examining views, the Top 10 influencers of 2018 also saw a growth of 40% when compared to 2017's Top 10 views, securing almost 2.1 billion views between them. When looking at the entire Top 100 influencers, the overall view growth was up 2.5 billion, proving without a doubt that the Top 10 influencers on YouTube, regardless of who they are, have become even more influential.

We recognise YouTubers as having an influential effect if they have 100,000 subscribers or have posted a video with 50,000 views -- amounting to more than 10,000 YouTubers. Out of all of these, views for each channel grew approximately half a million on average over the last year, signifying YouTube is still a growing influencer platform. And there were more influencers that grew in views than shrunk.

Twitch, however, is still yet to be totally utilised by publishers, developers and consumers, even though it could be considered more suited to video games.

Influencers on Twitch post more or less with the same regularity as YouTube and during the last four weeks, streams have been averaging one stream a day for each recognised influencer. However, peak viewers for the Top 100 influencers during this period have only reached 27,000 viewers on average.

More encouraging, however, is 'follower' growth. During the same period of the last four weeks, an average growth of 36,000 for each influencer is displayed. Although again far lower than YouTube, the platform is showing a healthy growth. Eventually this promising subscriber growth could start to challenge YouTube as the influencer platform of choice, especially with its financial transactions to incentivise the channel provider built into Twitch via its Amazon backbone.

That said, views need to increase massively before YouTube should feel worried. Also, it is worth noting that there are also an avalanche of channels on Twitch -- we have over 1.8 million in our dataset, although we deem a mere fraction as being worthy of the label 'influencer', suggesting that views and followers are being spread rather more widely on Twitch than on YouTube.

When investigating the ones to watch for 2019, a few YouTubers stand out. GhostNinja is one that has reaped massive view growth in 2018 when comparing to 2017 - however, when delving into his game preference, out of 497 videos in 2018, 493 were indeed on Fortnite. 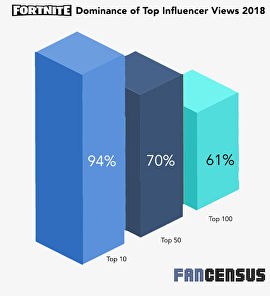 Focusing more on Fortnite in the Top 100 influencers for 2018, there are only two influencers that solely focus on the game. Among those that do post on other games, post count is astonishingly low for anything other than Fortnite. In fact, 43 out of the Top 100 focus more on Fortnite than any other title and eight out of the Top 10 influencers published only 87 videos combined in the whole 12-month period of 2018 that weren't Fortnite-related -- solid evidence that the Fortnite effect still held a strong stranglehold at the end of 2018.

It's also fairly obvious when looking at these stats that Apex Legends chose an influencer-centric launch, a tactic that appears to be paying off with the game already seeing strong coverage across both YouTube and Twitch.

In summary, these analytics suggest it's getting tougher to find beneficial influencers that drive views for your product with so many focusing on a small subset of games. In addition, with Fortnite being challenged by Apex Legends, we might see a massive change in top influencers in 2019 due to their battle royale preference.

I believe influencers have over the last five years facilitated growth for our industry. In addition, they may have also assisted in increasing the 'shelf life' of top physical and digital games. Even if many seem to live the life of luxury, we should and will ultimately embrace them for many years to come.