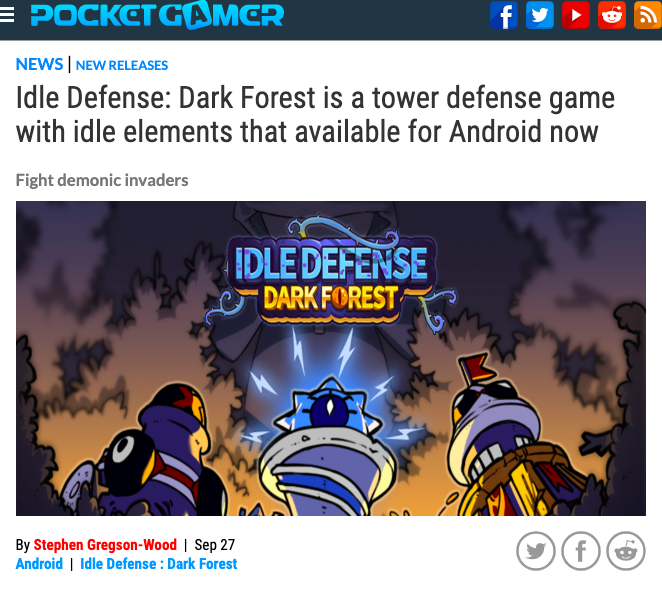 Idle Defence: Dark Forest is a tower defence game from the independent Chinese studio Lemon Jam that saw over 50,000 downloads during its recent beta phase. It's a free-to-play game that's available for Android.

The game kicks off with a young wizard-in-training accidentally burning down half of his school. Naturally, he gets expelled. During the fire, a magical seal was destroyed that allowed various evil beasties to swarm from the now broken seal. During his expulsion, the wizard began reading a book called 'Turret Engineering'.

It sounds like a much more involved premise than I'm used to from a lot of these idle games. Often times it's more a case of 'here's some turrets' go defend your base. So at the very least, it's interesting that Lemon Jam has put the effort into creating a backstory.

You'll be able to choose from 10 different types of tower which will have various different uses. For instance there will be towers that simply fire arrows whilst some of the others will be able to inflict poison. If enemies have different weaknesses then it gives the game much more strategy than simply having to pop down multiple turrets of any kind.

There will also be the option to summon various demons to assist you in battle. There are currently 16 different demonic helpers you'll be able to call upon with the developers intending to add more in the future.

Of course, this an idle game so there's also many resources to gather. These resources can be used to resurrect yourself after losing in battle so if you have enough of them, then in theory you'll never be able to lose.