How you should implement subscriptions in games 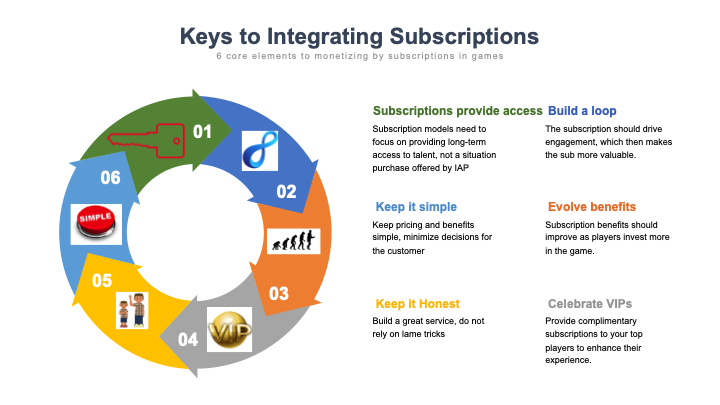 How you should implement subscriptions in games

The momentum of subscriptions in mobile games has accelerated in recent years. On Google Play, we’ve seen global growth in game subscriptions of 70% year-over-year.

While subscriptions are an exciting opportunity, success with the model will come down to execution. According to Lloyd Melnick’s idea. Here are 6 keys to integrating subscriptions in games.

The biggest challenge, and most common mistake, game companies face is what to provide for the subscription fee. The easy answer is virtual currency, after all it is what customers are willing to pay for with in-app purchases. The easy answer is wrong. As stated in the Google post, “it’s important to move away from the mindset that subscriptions are just an auto-renewal mechanism for discounted IAP. Instead, subscriptions need to be thought of as offering highly-retentive long-term access to content, rather than the one-time situational purchase of content offered by IAP.”

In a game like Archero, it could be access to special levels or powers. The benefits could also be exclusive tournaments, special avatars or unique in-game events. The key, though, is not limiting (or even relying) on giving players virtual or premium currency but access to a premium experience.

One of the core principles in creating successful products is to focus on simplicity, which is often very complex to do, and subscriptions are one area where it is easy to fall into the complexity trap. Companies with very successful subscription offerings have very few options.

If you offer customers too many options, it is likely to overwhelm them and preclude them from choosing any of the options. This concept of cognitive load is critical to the success of many products, from games like slots to apps like Uber. Given that the human brain consumers 20 percent of the body’s energy but only is 2 percent of the body’s mass, it is important to understand that people will subconsciously work to reduce the amount of energy the brain is using.
Cognitive load is how much info people are processing at any one time. Cognitive load is tied to working memory, the more information in that short-term memory the higher the cognitive load. As cognitive load increases, consumers are less likely to make a purchasing decision.

With subscriptions, this is directly tied to the offerings. If a player has different options ranging from the term of the subscription, monthly costs, benefits levels, they are likely to choose none. For example, you might offer people a month-to-month, 3-month-, 6-month or 1-year plan, with pricing at $4.99, $9.99, $19.99 and $49.99, each with different benefits. Rather than the player finding the one that optimizes their utility (to use an economist term, or makes them happiest, to use a human term), they are more likely to shut off and just pass on the offerings.

Instead, offer them one or two (at most) options. It can be a regular subscription or a premium one (additional benefits) or a short-term plan and an annual plan. You do not see Netflix offering ten different types of subscriptions. The key is make it very easy for the player to understand the value and choose between the two plans and whether or not to subscribe.

One of the reasons subscriptions took so long to be commonly accepted is that until recently they were part of a sleazy industry. Companies would trick customers into signing up for a subscription, then make it very difficult to cancel the subscription. They might let you sign up easily, then require you to call them to cancel at a call center open one hour a week every second week. Even then, the agent you spoke to would do everything humanly possible to keep you from cancelling, creating an awful experience.

Preventing customers from leaving or tricking them into subscribing is not only unethical, it is bad business. One of the fundamental values that subscriptions create for a business is the connection with the customer. It forces the company to ensure every month it is creating value for the customer and that is why the customer renews or maintains the subscription. Everyone on the product team looks at new content and features and judges whether it will help retain customers and bring in new subscribers. While scamming customers may bring short term gain, it is the customer connection that subscriptions create that leads to great companies like Amazon, Netflix, Spotify, etc.

The best companies use subscriptions to improve their underlying business. Tien Tzuo writes in Subscribed that “the smart [companies] realize that if they really want to retain their subscribers, they need to focus on building a great service, without relying on lame tricks like hiding the cancel button.…Make it easy for customers to leave if they want to. You can certainly ask them why they’re leaving, or try to win them back, but don’t get in their way—the digital equivalent of blocking the exit with a hulking security guard. When you build subscriptions into your game, let customer value drive the offering rather than tricks on keeping customers from cancelling.

A successful subscription plan should be tied to engagement in the underlying game. The more a customer plays the game, the higher the value of the subscription. According to the Google post, “in mobile games’ subscriptions design, some offer a booster or bonus points, to reinforce the action of ‘play.’ Some create a durable good, such as a permanent building or character, that levels up as a player remains a subscriber for a longer period of time. In these cases, the desired action is “continue to subscribe.” In other cases, subscribers get bonus premium items, currency or points to reinforce the action of in-app purchases.

Another important element of a successful subscription program is that benefits evolve. According to Google, “as the players invest more in the game, whether it’s with their time, skills, or other IAP, the subscription benefit also compounds.” Thus, the player can unlock more sophisticated content or new challenges that would not have been relevant for them earlier in their experience.

VIPs are the core of virtually any social game’s success. Most free-to-play games generate 60-90 percent of their revenue from the top 1 or 2 percent of players. Many product managers have avoided subscription programs because of concern on how it would impact VIPs. If a player can subscribe to a VIP program for a fixed sum, the concern is that would put a cap on how much the VIP would spend in the game.

This concern leads back to the first point on subscription design, that is should be about access, not a replacement for existing purchases. Thus, the subscription plan might give the VIP access to slots they would love to play but not chips to play those slots.

When thinking about your VIPs, do not forget they are already VIPs. If someone is spending significantly in your game, do not try to take another $5 or $10 from them every month. Instead, turn the subscription into a celebration of their VIP status. Give them a free subscription, the goodwill will be worth much more than the short term revenue you would generate from forcing your VIP to purchase a subscription.

A serial builder of businesses (senior leadership on three exits worth over $700 million), successful in big (Disney, Stars Group, Zynga) and small companies (Merscom, Spooky Cool Labs) with over 20 years experience in the gaming and casino space.